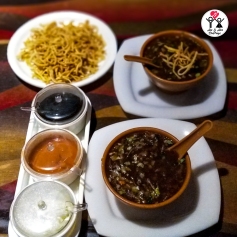 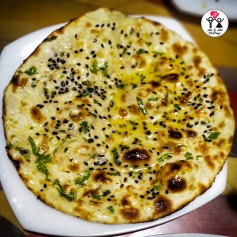 One Liner:
A Budget friendly option for your month end cravings which serves really scrumptious food.

What’s Different:
They serve half portion of sabji’s when order for second time. But if you sit in Non-Ac section and you request it the first time, then they do give it.

Location:
This restaurant is located on the busy street of Girgaum near Central Plaza.

Ambience:
It has both Ac & Non-Ac Sections. The AC section is on the first floor. The lighting and the ambience is nice which uplifts your mood.

1. Veg Manchow:
A soup prepared with various vegetables thickened to a perfect consistency. It had relatively generous doses of spices which made it more tasty. It was served with crispy fried noodles. Both the Jain and Non-Jain were good to taste. The Jain one was more tangy because of chopped tomatoes were added to it.

2. Pav Bhaji:
This one is among the best Pav Bhaji’s that I have ever had. It was totally mumbaiya style, masaledar, tangy & buttery as well. We personally liked the jain pav bhaji more than the Non-Jain one. But both tasted amazing. MUST TRY..!!

3. Paneer Angara & Roti’s:
Paneer Angara is a lip-smacking sabji made up of a spicy & smoky flavored gravy with cubes of tender and soft cottage cheese in it. It was a treat to our tongue.
The Butter Roti and Kulcha’s were served hot, crispy and loaded with Butter. The Kulchas are topped with black sesame seeds which makes it more appealing. 😍

This site uses Akismet to reduce spam. Learn how your comment data is processed.

How to make Beetroot Halwa?